Go to content
This short description is adapted from that present in the web site of North American Catalysis Society and prepared by John Armor with suggestions from Bob Farrauto and Enrique Iglesia. It is intended to provide a short intro (for non-experts) to explain what catalysis is.
Catalysis is a technology which increases the rate of a chemical reaction. This technical field employs both scientists and engineers. Catalysts are the materials used by these persons to explore the phenomenon of catalysis. Catalysts are materials which speed up chemical reactions without the catalyst being consumed; they are materials which induce change. More specifically, catalysts are materials which change the rate of attainment of chemical equilibrium without themselves being changed or consumed in the process. Catalysts also provide selectivity or specificity to particular products which are more desirable than others. All these attributes about catalysis and catalysts translate to energy savings, less pollution, fewer side products, lower cost reactor materials, and ultimately products which reduce global warming. It has been said (A. Mittasch) that “chemistry without catalysis would be a sword without a handle…or a bell without sound.” 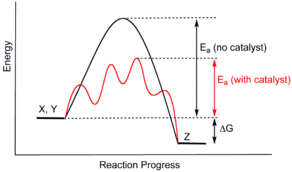 Catalysis is the key to both life and lifestyle. It is an essential technology for chemical and materials manufacturing, for fuel cells and other energy conversion systems, for combustion devices, and for pollution control systems which greatly impact everyone on our planet. Some other specific examples of what catalysts do include applications for:
The economic contribution from catalysis is as remarkable as the phenomenon itself. Four sectors of the world’s economy are petroleum, energy production, chemicals production, and the food industry; together they account for more than 10 trillion dollars of the world’s GNP, and all of these are critically dependent on the use of catalysts. Estimates are that catalysis contributes to greater than 35% of global GDP; the biggest part of this contribution comes from the generation of high energy fuels (i.e., gasoline, diesel, hydrogen) which depend critically on the use of small amounts of catalysts in our world’s petroleum refineries. As a business, the catalyst market itself is growing from the current US$12 billion, so that catalysis costs are much less than 0.1% of the sales revenue from the products which they create.